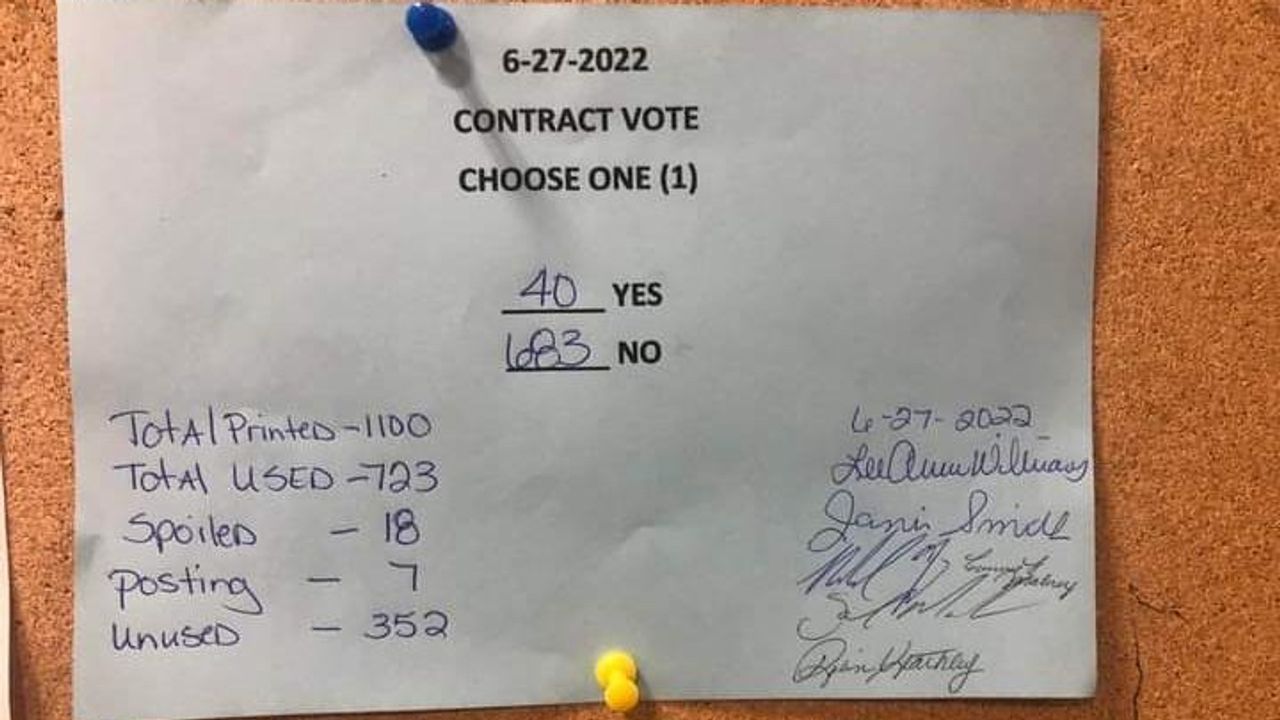 Ventra workers: We want to hear from you! Fill out the form at the end of this article to tell us what you think of the defeated contract and what you think workers should be fighting for. We will protect your anonymity.

Update: Read the statement of the recently formed Ventra Evart Workers Rank-and-File Committee, Ventra workers deserve a $10 raise! Throw out the bargaining committee and elect a new one from the shop floor!

Workers at the Ventra auto parts plant in Evart, Michigan, defeated a concessions contract endorsed by the United Auto Workers (UAW) union by a near-unanimous margin in voting Monday. The workers make plastic moldings and other components, including fascias, lamps, and wheel flares, for the Big Three automakers and Tesla.

The total was 683 “no” votes (or 94.5 percent) to 40 “yes” votes (or just 5.5 percent), according to the official tally, a crushing repudiation of the UAW’s efforts to ram the pro-company agreement down workers’ throats.

Ventra workers, in rejecting the UAW’s insulting tentative agreement, have taken a stand for the entire working class. Their rebellion against the union bureaucracy is the latest in a series by workers over the last year and a half, which have seen “no” votes on UAW-endorsed contracts by as high as 90 percent at Volvo Trucks, parts maker Dana Inc., John Deere and Detroit Diesel.

The rejection of the UAW-Ventra deal is just the first step. Based on the UAW’s long record of conspiring against workers on behalf of the corporations, the union will now double down on its efforts to secure Ventra’s terms and maintain the sweatshop conditions at the plant.

In order to draw up a list of demands and prepare a real struggle to win them, Ventra workers should move quickly to form rank-and-file factory committees, independent of the UAW and comprised of the most militant and trusted workers.

A key task of such a committee will be to appeal for support from the tens of thousands of auto and auto parts workers who are similarly chafing against UAW-imposed concessions and seeking to fight for major improvements to wages, benefits and working conditions.

Based even on the limited details on the contract workers received from UAW officials, the tentative agreement was a total sellout, and would have imposed substantial concessions in wages and health care on workers.

Workers’ share of health care premiums would increase substantially over the five years of the contract, according to a copy of the UAW “highlights” of the agreement.

Meanwhile, wages would have increased just $2.50 an hour over the life of the five-year contract, entailing a major cut to workers’ real income with inflation and higher health care costs taken into account. Workers at the plant say many currently make between $16-$17 an hour, in which case the raise would have come out to an average of roughly 3 percent per year or less. With inflation running at 8.6 percent, this would mean workers would see a cut of 5 percent a year or more in pay in the first year alone.

The miserable terms of the contract and the UAW’s anti-democratic, strong-arm tactics to secure its passage have provoked outrage among workers.

During a UAW meeting last week, a worker who was criticizing the proposed agreement had his microphone cut by union officials, according to video footage shared with the WSWS Autoworker Newsletter. Workers in attendance erupted in anger afterward, shouting at the UAW, “We have a right to talk!” and “You guys are pathetic!”

A worker told the WSWS that the worker who had their mic cut “was removed from the meeting.” In response, they said, “Three fourths of our members walked out of the meeting with him, because our regional rep told us, ‘You’re not the Big 3, you won’t get their benefits.’”

“I was not there, I literally did not have the gas money to drive to Evart to support my brothers and sisters,” another worker said. “However, I was on the phone listening with a very close coworker, and I was at loss for words when they ripped the mic out of our brother’s hands. I supported my brother and sisters walking out.”

The worker said they were “disgusted” with how the UAW officials treated workers at the meeting. “Our UAW representative Dan did NOT seem like he was for the people. He repeatedly said we will NOT get the wages we deserve, and to look for employment elsewhere. Which was a HUGE slap in the face.”

According to multiple workers, UAW International “Servicing Representative” Dan Kosheba insisted that they did not deserve and would not be able to secure higher wages. Kosheba earned an income of $134,789 last year, according to the UAW’s LM-2 federal filing, for his “services” to autoworkers.

Workers had also circulated a statement on Facebook calling for a rejection of the deal and denouncing the UAW. “We should have at least 3 days to look over and ask questions about the contract,” the letter states, in response to the union’s efforts to stampede workers into ratification.

It continues, “Why was there no strike vote? We pay into the strike fund but can’t use it?”

You can’t afford to buy the vehicles that you make the parts for.

Why does part of the bargaining committee always end up in management after the contract passes? Every damn time!!

There is no reason we should give up anything in this contract. The last one gave up enough!

“Treat you less than human”

A Ventra Evart worker told the WSWS Autoworker Newsletter, “Two years ago, milk used to cost 99 cents, now we pay close to $5. The union was pushing us to vote for Biden, and now we can’t afford gas. The UAW have millions in the strike fund. I’m not a fan of the union, like most people here.

“A lot of people are angry. In the last contract, we heard that they showed the highlights and forced votes on the spot. Some people were not there to vote.”

The worker continued, “We clean up errors from mismanagement and keep going even if there are issues with parts. If you shut down the line the management will come down on you. If you reach out to the union they come days later. I’m a person, not a robot. We work on parts every 30 seconds no matter what issues come up. Line speed should be controlled by workers, not management.

“Topping out at $19 an hour after five years, I won’t be able to afford to work there. Already the cost share for employees for health care will be up to 18 percent by 2027.”

Ventra, which is a subsidiary of Illinois-based Flex-N-Gate, is ranked among the top 50 in Automotive News’ list of Tier-1 global parts suppliers. Flex-N-Gate is owned by billionaire Shahid Khan, who also owns the Jacksonville Jaguars National Football League franchise. Flex-N-Gate produces metal bumpers, plastic interior and exterior parts, lighting, signals and metal assemblies and has over 64 manufacturing plants around the globe, with over 24,000 employees.

Anonymous posts on Ventra Evart’s Indeed page describe the brutal sweatshop conditions at the plant and the indifference of the UAW to workers’ concerns. “Training is a joke, completely unsafe work conditions, everything is rushed the only thing the company cares about is rapid production. The turnover rate is about 70 percent of new hires. Over all, I would not recommend this to anyone who has opinions. Bad union representative who care nothing for you. Treat you less than human.”

Earlier this month the UAW increased strike pay from $275 to $400 amid growing anger among workers over the starvation rations the union doles out from its $800 million strike fund. However, as seen in contract battles over the last several decades and particularly the last two years, the UAW is continuing its efforts to block all measures of independent struggle. When it finds itself unable to completely prevent a strike—as at Volvo Trucks, Deere, and most recently, farm equipment maker CNH—the UAW works to isolate and wear down the struggle, keeping its members in the dark before springing pro-company deals on them.

Ventra workers must draw lessons from the struggles of autoworkers around the country and internationally. At Detroit Diesel, after a 4-1 ratio rejection of the initial contract, the UAW brought back the same contract, only to report it passed by 73 percent. Workers found themselves facing a struggle against a “union” whose president, Ray Curry, sits on the board of directors of Detroit Diesel’s parent company, Mercedes Benz AG.

The opposition which has already emerged to the contract at Ventra is part of a growing wave of militancy and struggles by workers all over the world, from CNH workers in Wisconsin and Iowa, to rail workers in the UK, US and Canada, to car haulers, nurses, rail workers, airline workers and others elsewhere. Major class battles are looming, including the expiration of a contract for some 25,000 West Coast dockworkers this week.

A rank-and-file committee at Ventra would provide the means to link up with and coordinate with these emerging struggles, leveraging the collective strength of the working class. The WSWS Autoworker Newsletter will do everything in its power to assist Ventra workers in organizing a fight back for higher wages and other basic needs. Fill out the form below to share your voice on the struggle and get in touch with us today.

Make your voice heard: What are your working conditions like? What do you think workers deserve and should be fighting for? We will protect your anonymity.